What is Natural Horsemanship? Chrissy has been riding since she was only 4 years old. She is a certified instructor with Certified Horsemanship Association, approved TIP Trainer through the Mustang Heritage Foundation and Associate Trainer with World Bitless Association. Chrissy says on her site “The Evolving Equestrian is dedicated to helping horse owners form positive relationships with their horses. Our primary focus is to educate horse owners and riders about reward based training and species appropriate care and environment, while offering support through training clinics, lessons, and online coaching.”

Find out more about Chrissy at www.theevolvingequestrian.com

What is Natural Horsemanship?

Natural horsemanship is a training approach that rose in popularity in the 80’s. It’s important to acknowledge that natural horsemanship was intended to be a kinder and more understanding way of working with horses. And for that it deserves kudos. Fathers of the natural horsemanship movement used their observations of natural behavior in horses to derive their methods. They made an attempt to understand how a horse’s mind works and interact with them in the way they “naturally” understand as opposed to the use of sheer force and outright abusive methods that were common in the “cowboy” way of breaking in horses in the American West. For people looking for a more sympathetic approach, this ideology was very appealing.

The premise of natural horsemanship is that we can interact with horses as one of them. That we can build a relationship with them by gaining their respect and establishing ourselves as the dominant individual which in turn will bring about trust and obedience. This is usually achieved through a series of exercises designed to garner respect by moving the horse’s feet and effectively proving the human’s worth as the leader. This involves mimicking equine body language and behavior. A miniature replica of herd dynamics, so to speak.The problem is they got it wrong. While these cowboys had their hearts in the right place, the science just isn’t there to support their philosophy. The behavior they observed in horses was taken out of context and anthropomorphized or explained using human traits and characteristics. The founders of natural horsemanship were cowboys, not scientists/researchers. So they saw one horse pin her ears and advance towards another horse and when that horse gave ground and retreated in order to avoid further conflict (a classic example of negative reinforcement) they explained the horse’s obedience as the human concept of respect and dominance. However, we know that the equine brain is not structurally capable of comprehending these concepts and this behavior is better explained as a result of reinforcers and punishers. We also know that there is no evidence to suggest that horses view humans as part of their social system because simply enough, they know we are not one of them. So, mimicking their body language and behavior does little to earn us social standing even if they were capable of understanding rank.

As a small addition here, it might be helpful to note that the cowboys were making their observations of domesticated horses, rather than wild ones. This is important because we know that horses in domesticated situations behave differently (e.g. Stereotypical behaviours have not been found to exist in wild horses).

So, while this approach was a stepping stone towards more ethical practices, natural horsemanship itself is not always ethical because of these foundational flaws in its philosophy.
It may very well be less physically abusive than the old cowboy way, however the use of escalating pressure and the whoever moves first loses theory can result in similar use of force. Just slower to get there. Mental pressure or utilizing fear to motivate horses is as equally abusive as physical force. So, while flapping a flag in a way that rhythmically builds pressure to frighten a horse onto a trailer may look less abusive than actually striking the horse with a whip, the animal is as equally emotionally distressed.

Despite all the misconceptions about how horses learn and interact with one another, natural horsemanship is able to solve problems for horse owners. It’s important to note that natural horsemanship may “work” but it does not work the way it claims. The only reason why it semi-works is because unbeknownst to the original practitioners of natural horsemanship, they were actually applying scientific principles such as the use of negative reinforcement and positive punishment. The overuse of aversives and methods of flooding horses in order to desensitize them to scary stimuli can have detrimental effects on the horse’s emotional and mental well-being resulting in horses who are internal, shut down, withdrawn, and even a state of learned helplessness. So, it may seem one can find success with these methods because the horses become less reactive and more cooperative, but this is not a product of gaining respect and establishing dominance, but rather suppression of behavior through repetitive aversive training techniques.

I didn’t know all of this when I fell down the natural horsemanship rabbit hole. I submersed myself in this philosophy and learned everything I could about it, investing both financially and in years of my life in my education. So, having been so deeply involved, what is salvageable of this education in natural horsemanship? What have I kept and continue to use and what did I throw out, so to speak?

I think when people ask me what all I still use they want to know which exercises are good and which are bad. I think there are some useful exercises that can be modified and trained with positive reinforcement or if you don’t use positive reinforcement are worthwhile teaching with the correct use of negative reinforcement. The way I weed out the exercises that are useful from the ones that aren’t are by determining if the exercise helps teach the horse a necessary skill or if it is designed to gain respect or assert dominance. For example, teaching a horse to turn their head neck with a rein cue is a skill I want my horses to learn. I modify this exercise by not asking the horse to reach back as far as is taught in natural horsemanship and I also use a target to show the horse what I want them to do and use positive reinforcement as opposed to increasing the pressure and making the rein aid an aversive the horse has to avoid to find relief. This exercise is practical for training the horse to turn and bend. An exercise that may be unnecessary is one that involves making the horse run in circles and change directions to move his feet and become more “respectful”. No more lunging for respect because you’re wasting your time. They don’t understand respect. You’re just chasing the horse in circles. It’s not doing what you think it is. I lunge at liberty using positive reinforcement now and my purpose for doing so is to train cues for walk, trot, canter, stop, and reverse and also for exercise. I may want to teach my horse to back up because that’s a good skill for them to learn, but I again modify it to be trained without using aversives and I don’t misuse it as a reprimand or to gain respect.

I don’t follow a list of exercises anymore. I don’t practice the same ones with every horse or in the same order. Horses are far too complex and diverse to train them all the same way. I have a game plan for what an individual might need to learn, but it is truly unique to them and what they need.

In all honesty, I am grateful for the work natural horsemanship has done to introduce gentler ways where people attempt to understand the horse, but I can’t say I recommend it. There’s too much to sort through and there are better trainers and better programs out there to learn from. I would really like it if natural horsemanship became part of history so we can focus on the real science.

With thanks to Chrissy for allowing us to share her post on our blog. I think it’s really important to understand and acknowledge how we have evolved as equestrians and Chrissy and I have very similar paths – and I think many equestrians will recognise glimmers in their own journey. Making sense of who we are and where we are going can help give us strength, clarity and wisdom as we move forwards in learning how to educate and be educated by the entity that connects each and every one of us and why we are all here – the horse.

I highly recommend checking out Chrissy’s Facebook page too www.facebook.com/theevolvingequestrian 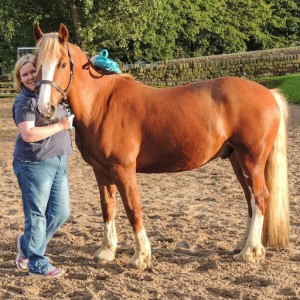 Get The Latest Updates

No spam, notifications only about new articles, special offers & updates. Should we be drugging our horses? Say “NO!” to the Daisyrein Help! My Horse is Getting Stronger PrevPreviousA Question of Choice
NextHelp! My Horse is Getting StrongerNext

Should we be drugging our horses?

PLEASE NOTE: Due to a request to not use the trademarked name, we have changed the name of the product in the post. I’ve recently learned about ‘Relaxing Cookies’. These are made by a UK no.1 performance company and are sold with the following benefits: “Helps your horse stay calm, confident and focused without affecting the

Say “NO!” to the Daisyrein

Help! My Horse is Getting Stronger

To SUCCEED in training, you need GOOD BRIDLE FIT and the right bridle action for your horse….. Why is this? Training can work on the mind of your horse, but if bridle fit is distracting their mind because either it’s… 🐴…creating negative pressure 🐴…working on sensitive areas 🐴…working on painful areas 🐴…not being used correctly

This website uses cookies to improve your experience while you navigate through the website. Out of these cookies, the cookies that are categorized as necessary are stored on your browser as they are essential for the working of basic functionalities of the website. We also use third-party cookies that help us analyze and understand how you use this website. These cookies will be stored in your browser only with your consent. You also have the option to opt-out of these cookies. But opting out of some of these cookies may have an effect on your browsing experience.
Necessary Always Enabled
Necessary cookies are absolutely essential for the website to function properly. This category only includes cookies that ensures basic functionalities and security features of the website. These cookies do not store any personal information.
Non-necessary
Any cookies that may not be particularly necessary for the website to function and is used specifically to collect user personal data via analytics, ads, other embedded contents are termed as non-necessary cookies. It is mandatory to procure user consent prior to running these cookies on your website.
SAVE & ACCEPT
Scroll to Top